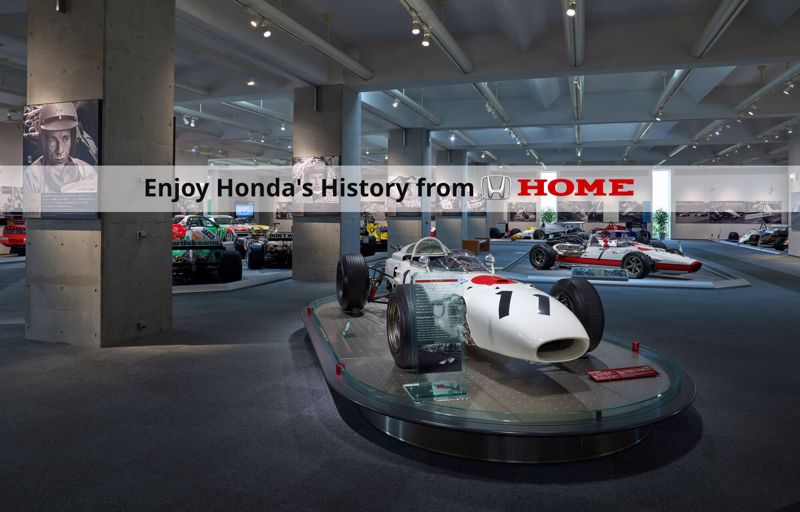 The Honda Collection Hall (HCH), a museum located at the Twin Ring Motegi circuit in Japan, hosts the largest collection of products developed by the company, with over 300 models on show – all via a 360º virtual tour.

You can take the tour by pressing the red button below. Here, you can retrace the history of the Japanese manufacturer through an exclusive collection of cars, motorcycles, power products and racing machines.

Opened in 1998 to not only commemorate Honda's 50th anniversary but also show the dreams and passion that inspired both mass-production products and racing machines. This initiative can help keep minds busy whilst they're at home, especially given the extraordinary situation that we find ourselves in.

The virtual tour recreates a physical tour of the museum, allowing us to imagine that we had really travelled to the home of Honda to relive the company's 70-year history through its most iconic products. Without moving from the sofa or desk, we can explore the museum's three floors and see an extensive selection of vehicles that were true milestones for Honda.

The second floor houses the car, motorcycle and power product sections, where the first ‘compact sports’ model from 1963, the S500 is the star of the show. As well as some of the brand's legendary models such as the Prelude, the NSX and the Civic, the exhibition also offers an overview of the evolution of the Japanese car sector, with special attention given to micro cars or Japanese kei cars, hugely successful in the Japanese market. Also on display are some of the manufacturer's earliest models, such as the Honda N360, the first mass-production micro car, which went on sale in 1967. Iconic two-wheelers on display include the CB750 – the world’s first mass-produced four cylinder motorcycle – and the oval-pistoned NR.

The third floor is dedicated to the racing side of Honda and we can see the single-seaters, GTs and motorcycles that Honda has raced in competitions, and still races today. In this section, there are some particularly iconic pieces, like one of the McLaren-Hondas raced by Brazilian driver Ayrton Senna, and the six-cylinder RC166 ridden to Isle of Man TT victories by Mike Hailwood.

The opening of the Honda Collection Hall is a response to the company's efforts to showcase Honda's origins and to use technology and mobility to enhance people's wellbeing.

These origins date back to the 1940s when Soichiro first fitted the engine from a generator used for a radio transmitter to his wife’s bicycle to make her daily shopping trips easier. In 1964 he developed the idea further and began selling the engines with fuel tanks, accelerators, wire cables and other parts to fit any bicycle. This engine became known as the Honda Bicycle Engine; two years later, in 1948, he founded the Honda Motor Company.